In a kickoff event on Saturday, November 13, the College announced that it will raise $111 million by 2025 in support of key priorities. 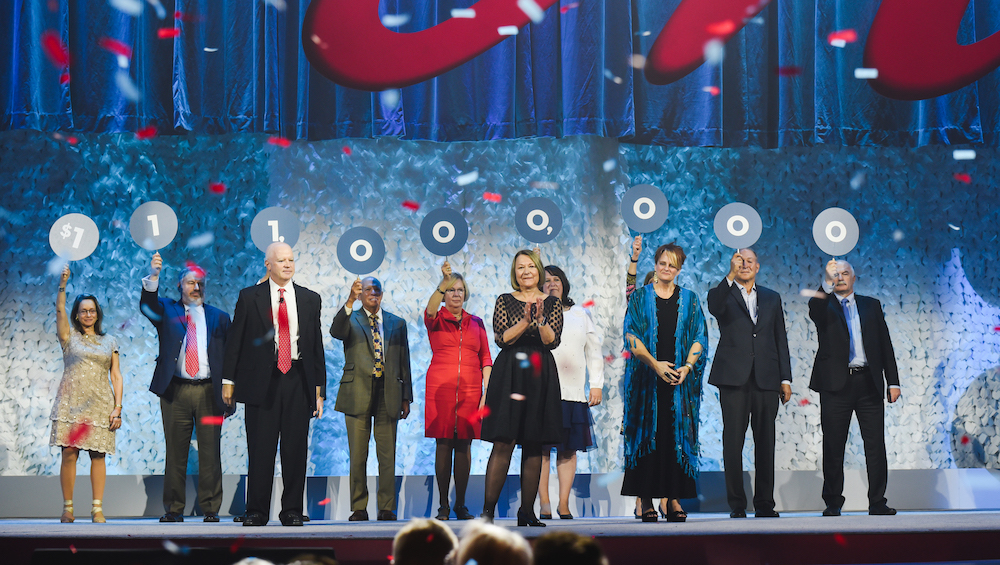 Saturday night, Memorial Hall transformed from a gymnasium into a performance venue. The College Choir opened the evening, singing Phantom of the Opera’s “Masquerade” from its place in the bleachers. Then, a spotlight shined on one of the singers, Aevyn Barnett ’22, president of the choir, who greeted the audience of alumni, parents and friends of the College.

“Welcome Muhlenberg family, to an evening like no other,” they said. “You’re probably wondering what is in store tonight. I must admit that sense of ‘what’s next’ was something I immediately felt when I first stepped foot on campus three years ago. Endless possibilities, opportunities, it all felt—”

“—boundless,” said Linda Cenci ’75 P’06, as the spotlight jumped to where she was standing on the floor. “That’s one way to describe it. Not being constrained or restricted to a single path, major, area or location. That’s something that should feel familiar to any Muhlenberg alumni here tonight. Look—not even the stage can contain us this evening.”

The event celebrated the launch of the public phase of Boundless: The Campaign for Muhlenberg. The campaign began its quiet phase in 2018 and had already raised $71.2 million before Saturday’s event.

College President Kathleen Harring introduced the campaign, saying, “Boundless is our commitment to lead a liberal arts renaissance. If that sounds overly grand, consider the urgency of our aim: teaching and empowering students to embrace change in a world that is changing at a breakneck pace, change that is coming at us with increasing speed and unpredictability. It confronts us with the opportunity and the urgency to secure a future that will create the next generations of nimble, dot-connecting Muhlenberg graduates.”

“It’s often said that an institution helps to shape students, but I also believe that the students shape the institution,” Bormann says. “Muhlenberg isn’t the same as when I attended, nor do I come back to campus expecting it to be a time capsule of the early 1980s. Quite the opposite, I’m delighted to see so much change and progress, but we have more work that we need to do to ensure that Muhlenberg is creating impact across the globe. We have the opportunity—no, the mandate—to move beyond our boundaries and to create impact beyond ourselves.”

The rest of the program introduced the audience to the seven campaign priorities—financial aid, The Muhlenberg Fund, endowed professorships, an expansion pf Seegers Union, integrative learning, the Parkway Boulevard Building and The Muhlenberg Network—via personal stories from alumni, students and faculty. Some speakers appeared on stage while others were on the floor or in the bleachers, holding a glowing orb to draw the spotlight as they spoke. Student and alumni performances were interspersed between the anecdotes.

Harring, Bormann and Peebles wrapped up the night by revealing how much the campaign had raised to date and how much it would raise—$111 million—before its planned end date in 2025. More than 64 percent of the target amount had been raised prior to the launch event.

“To continue to provide boundless opportunities, it is time to be boundlessly generous,” Peebles said. “It’s an investment and a sign of our belief in the transformational education this great College provides its students in preparation for the real world.”